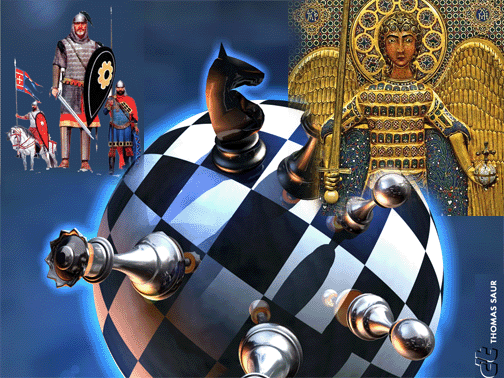 In March 1984, I was reporting from the Hawizeh Marshes in southern Iraq near the Iranian border. The Iran-Iraq War was in its fourth year, and the Iranians had just launched a massive infantry attack, which the Iraqis repelled with poison gas. I beheld hundreds of young, dead Iranian soldiers, piled up and floating in the marshes, like dolls without a scar on any of them. An Iraqi officer poked one of the bodies with his walking stick and told me, "This is what happens to the enemies of Saddam [Hussein]." Of course, the Iranians were hostile troops invading Iraqi territory; not civilians. But Saddam got around to killing women and children, too, with chemical weapons. In March 1988, he gassed roughly 5,000 Kurds to death. As a British reporter with me in the Hawizeh Marshes had quipped, "You could fit the human rights of Iraq on the head of a pin, and still have room for the human rights of Iran."

The reaction of the Reagan administration to the gassing to death of thousands of Kurdish civilians by Saddam was to keep supporting him through the end of his war with Iran. The United States was then in the midst of a Cold War with the Soviet Union, and as late as mid-1989 it wouldn't be apparent that this twilight struggle would end so suddenly and so victoriously. Thus, with hundreds of thousands of American servicemen occupied in Europe and northeast Asia, using Saddam's Iraq as a proxy against Ayatollah Khomeini's Iran made perfect sense.

The United States has values, but as a great power it also has interests. Ronald Reagan may have spoken the rousing language of universal freedom, but his grand strategy was all of a piece. And that meant picking and choosing his burdens wisely. As a result, Saddam's genocide against the Kurds, featuring chemical weapons, was overlooked.

In fact, the 1980-1988 Iran-Iraq, coterminous with the life of the Reagan administration, was a boon to it. By tying down two large and radical states in the heart of the Middle East, the war severely reduced the trouble that each on its own would certainly have caused the region for almost a decade. This gave Reagan an added measure of leeway in order to keep his focus on Europe and the Soviets -- and on hurting the Soviets in Afghanistan. To wit, only two years after the Iran-Iraq War ended, Saddam invaded Kuwait. Peace between Iran and Iraq was arguably no blessing to the United States and the West.

Likewise, it might be argued that the Syrian civil war, now well into its second year, has carried strategic benefits to the West. The analyst Edward N. Luttwak, writing recently in The New York Times, has pointed out that continued fighting in Syria is preferable to either of the two sides winning outright. If President Bashar al Assad's forces were to win, then the Iranians and the Russians would enjoy a much stronger position in the Levant than before the war. If the rebels were to win, it is entirely possible that Sunni jihadists, with ties to transnational terrorism, will have a staging post by the Mediterranean similar to what they had in Taliban-controlled Afghanistan until 2001, and also similar to what they currently have in Libya. So rather than entertain either of those two possibilities, it is better that the war continue.

Of course, all of this is quite cold-blooded. The Iran-Iraq War took the lives of over a million people. The Syrian civil war has so far claimed reportedly 110,000 lives. Even the celebrated realist of the mid-20th century, Hans Morgenthau of the University of Chicago, proclaimed the existence of a universal moral conscience, which sees war as a "natural catastrophe." And it is this very conscience that ultimately limits war's occurrence. That is what makes foreign policy so hard. If it were simply a matter of pursuing a state's naked interests, then there would be few contradictions between desires and actions. If it were simply a matter of defending human rights, there would similarly be fewer hard choices. But foreign policy is both. And because voters will only sustain losses to a nation's treasure when serious interests are threatened, interests often take precedence over values. Thus, awful compromises are countenanced.

Making this worse is the element of uncertainty. The more numerous the classified briefings a leader receives about a complex and dangerous foreign place, the more he may realize how little the intelligence community actually knows. This is not a criticism of the intelligence community, but an acknowledgment of complexity, especially when it concerns a profusion of armed and secretive groups, and an array of hard-to-quantify cultural factors. What option do I pursue? And even if I make the correct choice, how sure can I be of the consequences? And even if I can be sure of the consequences -- which is doubtful -- is it worth diverting me from other necessary matters, both foreign and domestic, for perhaps weeks or even months?

Luttwak himself offers partial relief to such enigmas through a meticulous and erudite study of one of the greatest survival strategies in history. In The Grand Strategy of the Byzantine Empire (2009), he demonstrates the properties by which Byzantium, despite a threatened geographic position, survived for a thousand years after the fall of Rome. This Byzantine strategy, in its own prodigiously varied and often unconscious way, mirrored Morgenthau's realism, laced as it is with humanism.

The Byzantines, Luttwak writes, relied continuously on every method of deterrence. "They routinely paid off their enemies….using all possible tools of persuasion to recruit allies, fragment hostile alliances, subvert unfriendly rulers…" He goes on: "For the Romans…as for most great powers until modern days, military force was the primary tool of statecraft, with persuasion a secondary complement. For the Byzantine Empire it was mostly the other way around. Indeed, the shift of emphasis from force to diplomacy is one way of differentiating Rome from Byzantium…" In other words, "Avoid war by every possible means in all possible circumstances, but always act as if it might start at any time [his italics]." The Byzantines bribed, connived, dissembled and so forth, and as a consequence survived for centuries on end and fought less wars than they would have otherwise.

The lesson: be devious rather than bloody. President Barack Obama's mistake is not his hesitancy about entering the Syrian mess; but announcing to the Syrians that his military strike, if it occurs, will be "narrow" and "limited." Never tell your adversary what you're not going to do! Let your adversary stay awake all night, worrying about the extent of a military strike! Unless Obama is being deliberately deceptive about his war aims, then some of the public statements from the administration have been naïve in the extreme.

A Byzantine strategy, refitted to the postmodern age, would maintain the requisite military force in the eastern Mediterranean, combined with only vague presidential statements about the degree to which such force might or might not be used. It would feature robust, secret and ongoing diplomacy with the Russians and the Iranians, aware always of their interests both regionally and globally, and always open to deals and horse-trades with them. The goal would be to engineer a stalemate-of-sorts in Syria rather than necessarily remove al Assad. Reducing the intensity of fighting would thus constitute a morality in and of itself, even as it would keep either side from winning outright. For if the regime suddenly crumbled, violence might only escalate, and al Qaeda might even find a sanctuary close to Israel and Jordan.

Such a strategy might satisfy relatively few of the cognoscenti. Though, the American public -- which has a more profound, albeit badly articulated sense of national survival -- will surely tolerate it. The Congressional debate that preceded the Iraq War did not save President George W. Bush from obloquy when that war went badly. The lack of such a debate would not hurt Obama were he to successfully execute the methods described in Luttwak's book.