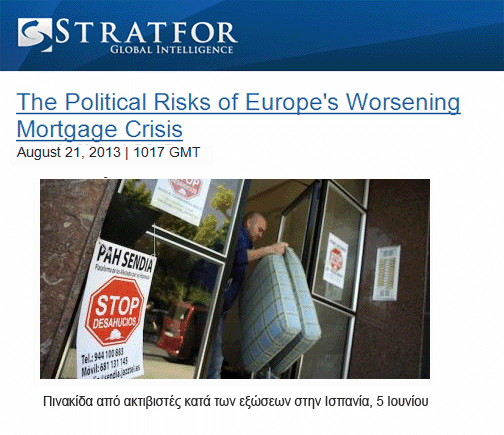 "...In Greece, the ruling coalition of Prime Minister Antonis Samaras' center-right New Democracy party and the center-left Panhellenic Socialist Movement is attempting to navigate a complex situation. Greece is going through its deepest economic crisis in recent history, and unemployment in the country reached 27.6 percent in May -- the highest in the European Union. As a result, around a third of Greek homeowners are not making their loan payments, leaving banks in Greece with an estimated 17 billion euros worth of delinquent mortgages on their books.

On Aug. 17, Greek Finance Minister Yannis Stournaras announced that Athens is planning to lift temporary restrictions on foreclosures to make it easier for banks recover some of their losses. The regulations were implemented early in the Greek crisis to prevent widespread social upheaval. Since then, the government has come under pressure from the European Union, the International Monetary Fund and Greek banks not to renew the restrictions when they expire in December. However, if the restrictions were indeed lifted, some 200,000 households could be affected, possibly sparking a substantial rise in social unrest.

The ruling coalition is already under considerable strain due to the departure of the left-wing Democratic Left party after Samaras decided to temporarily close public broadcaster ERT in June. The government's recent announcement that it plans to take a tougher stance on tax evasion has also been received with a mix of skepticism and anger by Greeks. Lawmakers from both parties have suggested that they might vote against lifting the foreclosure restrictions, casting further doubt on the future of the coalition.

Thus, the government will likely seek a compromise solution: Some homeowners, particularly those who have large incomes and other assets but who are exploiting the current regulations by not paying their mortgages, will be pushed to pay their debts. Others, particularly poor families with children or health problems, will be protected. In either case, the government will have difficulty enforcing the changes..."