"If we covered the US Election" 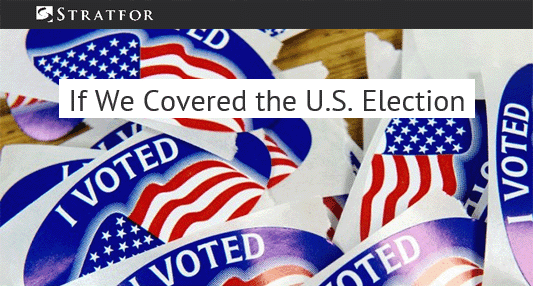 If We Covered the U.S. Election is republished with permission of Stratfor.


By Rodger Baker (υπογράμμιση δική μου)
Stratfor strives to provide impartial geopolitical analysis and forecasts that identify critical trends in global and regional affairs, explaining the world's complexities in a simple but not simplistic manner. Through the years we have always sought to adhere to these core underlying principles, with mixed success. Remaining "unbiased" in part means staying out of politics, avoiding policy prescriptions (or proscriptions), and addressing issues not from a good/bad or right/wrong approach but rather from a view of effective/ineffective. It means at times stepping away from the emotions of issues, examining deeper compulsions and constraints, and observing how leaders and global actors modify their behavior based on the shifting circumstances in which they find themselves.