Here are some findings and links as I ran across them over the last ten months, in the chronological order they appeared on this blog.

Renewable energy jobs soar in Germany, April 2008
"The systematic expansion of renewable energy is not only good from the environmental and climate policy point of view but also for innovation, growth and employment in Germany."
-- Sigmar Gabriel, the German Minister for Environment

A nice MAN-Ferrostaal advertorial, complete with plans for many gigawatts of solar thermal power in North Africa, gifts to Palestinian schools, etc. A cursory search on Ferrostaal will reveal a large presence in manufacturing and installation of solar projects.

Siemens probably has the nicest and most thorough brochures with solutions related to wind, solar and many other energy and environmental technologies. The brochures designed for the US market are the most attractive. 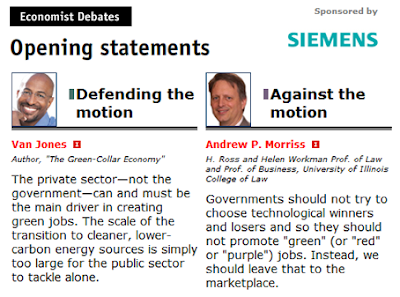 This Siemens, March 2010, Green Jobs advertorial in the Economist was an eye opener for me, as it disclosed the Green Jobs carrot of the Green Strategy. Each reader may see different interesting issues; I focused on the following statements:

A: There's no single, definitive answer, so many prefer as broad a definition as possible: i.e. any job that puts America back on the path to a cleaner, more energy-efficient future

Siemens' perspective
The question is not if tomorrow's green jobs will arrive, but when. The engine of job growth in America's economy lies in the entrepreneurial spirit of the private sector. But for the greening of America's economy to truly take root, government needs to send strong signals, create incentives, and construct rules of the road so the private sector can invest-and job growth can occur. Various government incentives, such as tax credits, are already helping spur the investment needed to begin creating the green jobs of the future. More needs to be done.There are two curious things about these statements: (i) Siemens is promoting central planning in the economy (which is a political matter) and (ii) Siemens is almost a sole provider of goods and services that would be purchased with taxpayers’ money should the US Administration and US taxpayers decide to agree with this point of view. As we know, the Obama administration, and several UK and Australian officials, agree with Siemens’ point of view. US taxpayers have begged to differ. I know it is probably unfair to remind the reader that in non-Anglo-Saxon countries such as Greece, Siemens may have practiced less noble methods to promote its goods and services.

As early as June 2010, it was apparent that a Democrat-Republican rift was evolving over the matter of “Climate change”. When I added this hyperlink today, the page was sponsored by AREVA with little icons of nuclear, wind and solar energy. Needless to say that the amount of power generated by these three alternatives differs by orders of magnitude.

Now, for a little break on seemingly unrelated historical subjects: Here is a little history on the founding of Deutsche Bank, by a Siemens nephew. More history on the Indo-European Telegraph Company. A little piece on the origin of the Great War. Some trivia on the Berlin Baghdad Railway. My non-expert summary from these historical briefs is that after about 1870, there was a concerted effort for imperial expansion on the part of European nations, and, on behalf of Germany, that effort was assisted or spearheaded by Siemens and Deutsche Bank. Nothing obscure about that, I could probably identify British companies with similar prerogatives. 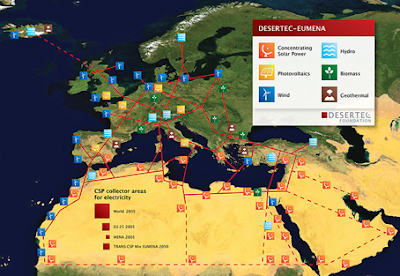 What I found rather interesting, however, is that there is a project called “Desertec” with Siemens and Deutsche Bank, among others, in its founding group, with an ambitious program to create a massive electrical grid around the Mediterranean to bring solar and wind energy from the Sahara and Western Africa to Europe. The ambition and complexity of this project somehow reminded me of the Berlin Baghdad railway and the Indo-European Telegraph Company, and I couldn’t help but note the similarities between the drive for Iraqi or Kurdish oil in 1900 and what seems to me as a drive for Northern African oil and gas. I hypothesize that if Northern Africa has the fossil fuels that it is supposed to have, it would be preposterous to install expensive and high maintenance optics and wind power equipment to ship renewable energy back to Europe. But, I might just be a little too cynical. 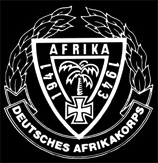 If you look into the Desertec foundation and its scope, it appears to be a rather well-planned exercise to introduce European-engineered products and lots of electrical wiring to North Africa, the Middle East, Iran, Central Asia and Australia. If you believe Wikipedia, Desertec is the brainchild of the German Aerospace Center and the German Federal Ministry for Environment, Nature Conservation and Nuclear Safety. I may have been seeing too many WW2 movies but I can't help but suspect a Green, Peaceful, Sustainable and Grand version of the Afrikakorps in all this… But, then again, the Club of Rome is also behind Desertec, so it cannot be that bad. Or can it? And I am truly curious to assess any relation to, or consequences from, the current turmoil in North Africa.

This strategic interlude is over, and we are back to more mundane details related to wind power. Surprisingly, a most eloquent document on the shortcomings and limitations of wind power came from E.ON, a major German electrical utility. I understand that this document may have been saved and posted by a UK anti-wind group.

Here are Keys to Survival: Climate, Energy and the Environment from the German Information Center in Pretoria.

One of my most popular posts has been a quotation from an article highlighting renewable energy problems in Germany. This article written by a German, together with the E.ON report mentioned above, are the best I have seen against the renewable energy craze. The following excerpt should be at the top of any anti-wind power brochure:

"In 1991 the government of Helmut Kohl enacted the so-called Power Feed-in Act, which was later amended by the Socialist-Green coalition government of Gerhard Schröder to become the EEG Act (Energy Feed-in Act). This Act, chalk-full of tricks, forced disliked power companies to buy renewable energy no matter the circumstances, and to do so at exorbitant state-regulated prices. But in a trade-off, the power companies were allowed to pass the higher costs on to the consumers. The state—the driver behind the price spiral—was then able to capitalise by collecting more revenue from energy taxes while dubiously claiming not a single subsidy is paid out. Is it any wonder that this tricky law has since become one of Germany’s biggest exports (so named with delight by Environmental Secretary Michael Müller of the SPD Socialist Party)? This is how the EEG Act was either fully or partly exported to over 46 countries worldwide. Governments assume, and rightly so, that there are enough masses of stupid people, and that they won’t be going extinct anytime soon."

If the mandatory feed-in-tariffs mentioned above are paying for the higher cost of green electricity, you may ask yourself who is providing the financing required in addition to the banks. I accidentally found the answer in this Holding Company in Zug Switzerland. One of its subsidiaries is called Good Energies. The principals in this Holding Company are also in this Private Wealth Council; Al Gore is in this group. The Private Wealth Council looks like a think tank for wealthy individuals. There is absolutely nothing obscure or improper in the entities or individuals in this paragraph. They are investing "billions of dollars" in Green Ventures, including wind projects in Greece, and an offshore wind power line along the East Coast Atlantic seaboard.

The Zug company has published a Responsible Wealth Review, very similar in look to the Harvard Business Review. I strongly recommend that you read it. It shows you "How to Make Money while Doing Good" (assuming you are rich to begin with), and on p.8 it has a most interesting article by Günter Grass. I would pay attention to the disdain expressed by Günter Grass on the "American Way" referring to the end of the United States' lifespan. This, in a brochure published by an organization that has Vice President Al Gore as a member.

Here is information from the German Ministry of Economics and Technology about Renewables - Made in Germany (lost link).

And here is Deutsche Bank Climate Change Advisors, complete with a carbon counter. I live in a quasi-bankrupt country, and I would guess that the international banking community has enough problems that are more pressing than greenhouse gases in our atmosphere. I would also argue that Deutsche Bank is misleading us as it ignores water vapor, which I understand is also a greenhouse gas in our atmosphere.

There are German concerns over phasing out solar tariffs in Germany, offset by expectations that photovoltaic exports will keep growing to sustain German employment, which is a political priority in Germany. 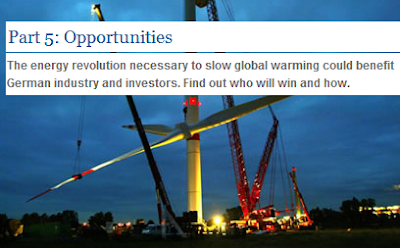 The section labeled "Part 5 Opportunities" in this lost link is as explicit as possible about the importance of Renewable Energy to German employment.

A Nobel Cause: An agglomeration of Nobel prize winners not related to Climatology or Energy, lending their glory, fame and names to Global Sustainability Gobbledygook, sponsored by the German Federal Ministry of Education and Research "in partnership" with WWF, co-sponsored by the Otto Group, Honda, Lufthansa, and the Technologie Stiftung Brandenburg. President Obama also received a Nobel Prize and that may be justifying his Green Obsession.

I started this not so random walk with Germany's energy sources. Here is an update: hydro, wind and photovoltaics currently amount to 1.5% of total energy requirements. Hydro, wind, and photovoltaics amounted to 10.5% of electricity production in 2008.

All the above do not prove that Germany is behind the Green Craze, but, excluding some academics and most Democrats in the US Senate, I failed to see other nations so deeply involved in Green Business. I will now revisit Strategic Planning, except, this time, it shall be Green.
Posted by archaeopteryx at 6:15 μ.μ.
Αποστολή με μήνυμα ηλεκτρονικού ταχυδρομείου BlogThis!Μοιραστείτε το στο TwitterΜοιραστείτε το στο FacebookΚοινοποίηση στο Pinterest