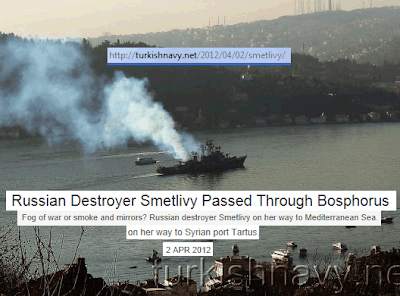 "The Russian Kashin-class destroyer Smetlivy docked at the port of Limmasol in Cyprus on Monday. Stationed in the Black Sea, the Smetlivy is one of 11 Russian ships that have been making their way to the eastern Mediterranean Sea for military exercises over the past week.

At around the same time the Smetlivy is expected to make a call to the Syrian port of Tartus, the Israeli navy is scheduled on Wednesday to hold military exercises off the Greek Aegean island of Milos. Last week the Turkish, Israeli and British navies were engaged in separate military drills south of Cyprus, while the NATO Maritime Group 2, consisting of Turkish, French and German frigates, held a military exercise in the eastern Mediterranean.

This is a lot of military posturing in a brief period of time for one body of water. A closer look at the shifting geopolitics of the eastern Mediterranean explains the growing international interest in this region.

The conflict in Syria is the most obvious reason for the rise in military activity in the eastern Mediterranean. Cyprus would serve as a key base of operations for NATO to carry out a military intervention in Syria. While no NATO member is eager to undertake such an operation, the recent downing of a Turkish jet by Syrian forces made clear that navies need to double-check their contingency plans. Even as political will is lacking, the exercises help NATO signal to Syria and to the regime's patrons in Iran and Russia that it is ready to intervene militarily.

Russia cannot allow a Western preference for regime change in Syria to undermine its uncompromising need for warm-water port access in the Mediterranean. Moscow uses military maneuvers and port calls at Tartus to emphasize to its competitors that Russia will remain a stakeholder in the Mediterranean for some time to come.

At the same time, Russia can't pin its hopes of maintaining a foothold in the Mediterranean on an increasingly unpopular minority regime in Damascus. Finding alternatives for military basing in this region will be difficult given NATO's strong presence. However, growing energy interest in the eastern Mediterranean combined with financial calamity in Greece and Cyprus provide Russia with a more diverse array of options to maintain its influence -- and energy politics is one arena Moscow certainly knows how to navigate with cunning and foresight.

Israel and Cyprus are both eager to exploit sizable offshore natural gas reserves in the eastern Mediterranean. Israel, now on bad terms with Turkey, is looking past its historical differences with Greece and Cyprus to develop a partnership with these countries that will help it balance against any interference it encounters from Ankara.

Russia, which already has complex relationships with each of these countries, is looking for opportunities within these shifting alliances. Russia may not be able to scuttle every attempt Europe makes to wean itself off Russian energy, but it can search for ways to surreptitiously insert itself into the diversification plans before Europe and the United States have time to react.  This means not only creating a space for itself in the energy industries in these states, but also exploiting the financial crisis in Europe to build up its leverage in the states most affected by the economic downturn. For example, Russia's state-owned Gazprom is a bidder for DEPA, the Greek gas corporation (which, in the future, could carry offshore natural gas from the Mediterranean into Europe). Russia on Monday also informed Cyprus, which urgently needs a bailout, that Moscow is ready to grant Nicosia a 5 billion euro ($6.1 billion) loan if Russian shareholders are allowed to increase their stakes in the Bank of Cyprus.

The success of Russia's strategy is not guaranteed, but we can see Moscow making a serious effort to maintain and even deepen its foothold in the Mediterranean. This strategy will require a lot of aggressive negotiation, as well as the deep distraction of Europe and the United States. With both Europe and the Middle East in turmoil, Russia doesn't have to look far for distractions to exploit. That point will be made if and when the Smetlivy docks at Tartus this week". (Stratfor) 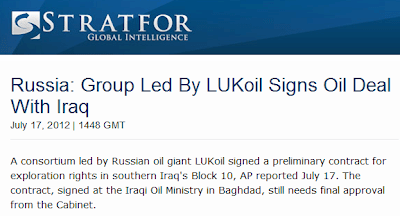