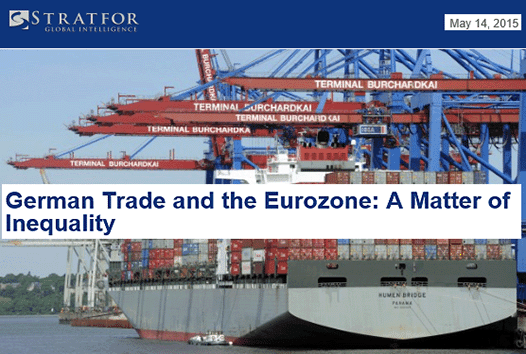 
Germany's large trade surplus poses a serious problem to the viability of the eurozone. But Berlin is unlikely to introduce policy reforms that could significantly rebalance the German economy. Even if implemented, such reforms are unlikely to solve the problem of unequal economic prosperity within the European Union. The strength of Germany's export industry as well as political decisions within the country will perpetuate existing trade imbalances and, more important, will threaten the survival of the European Union in its current form.

Germany has long been a net exporter, but with economic recovery coming slowly to the eurozone, Berlin's economic policies are under more intense scrutiny than ever. In early May, the European Commission said Germany's current account balance is set to reach a new record in 2015. The country's current account balance, or the difference between its income and what it spends, will be 7.9 percent of its gross domestic product this year, up from 7.6 percent in 2014. A week later, the International Monetary Fund said Germany's surplus would actually exceed 8 percent — this at a time when Spain is running a modest surplus of 1.2 percent and France is dealing with a deficit of -0.9.

These recent reports have reignited the debate about imbalances within the eurozone. Critics say Germany's account surplus, currently the highest in the world, is undermining local producers in other countries. Berlin's policies have been under fire for contributing to the eurozone's low inflation rate, which has hampered consumption while also making it harder for countries to service their debt. In addition, critics accuse Germany of not consuming enough domestically to help troubled economies in the European Union. In short, Berlin's fiercest critics say Germany's main export is not machinery or cars but unemployment.

Germany's domestic politics are part of the problem. In the early 2000s, Germany set about enacting policies aimed at restraining wage growth and generating jobs. The idea was simple: keep wages low, making it affordable for companies to hire more people. However, this also meant individuals would have less disposable income to spend on goods and services. And while the resulting decline in German consumption helped the country build up its own savings, German banks exported these savings to consumers in the European periphery, creating financial bubbles in the process. While Germany's current account balance moved from a deficit to a surplus between 2000 and 2007, countries in the eurozone periphery saw their current account deficits deepen or their surpluses shrink.

The introduction of the euro made the situation even more complex. Less productive countries in the European Union did not have the option of devaluing their own money to recover competitiveness because they were all locked into a shared currency. In addition, the euro is probably weaker than a potential deutsche mark but stronger than a potential peseta or lira; this artificial deflation favors the German export industry. 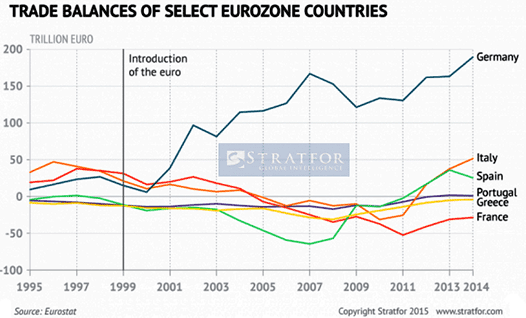 In the wake of the 2008 economic crisis, the problem has become only more pronounced. If the deficit countries are to regain competitiveness, they need to have lower inflation than Germany, which is leading to internal devaluations and a recessionary spiral in Southern Europe. Meanwhile, Germany's current account surplus is as strong as ever, though it has had to adjust to the global recession by turning to export markets outside the eurozone. As Western Europe's economy has weakened, Germany has started to rely more heavily on sales in Eastern Europe, the United States and China. 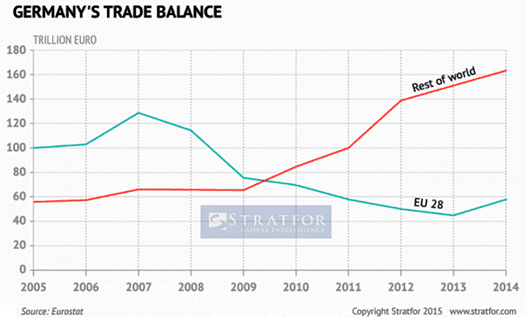 According to existing EU rules, the European Commission has the power to punish governments for large fiscal imbalances, and Germany's critics say its record-breaking surplus is an obvious violation of the rules. Despite announcing in 2013 that it would review the German situation, the commission has not put any real pressure on Berlin to change its policies and probably lacks the political muscle to do so. Countries such as Italy and France are interested in receiving Germany's tacit support for their own plans to breach the EU rules on budget deficits. This means Rome and Paris will probably not force the issue with Berlin. Instead, countries in Mediterranean Europe will probably continue to push for EU-wide investment programs, such as the so-called Juncker plan, which aims at improving investment in the Continent.

To alleviate its current account surplus, Germany could cut consumption and income taxes, raise wages and increase public spending. Berlin has made plans to invest more in energy, public transportation and digital infrastructure, but the International Monetary Fund's report in May said the projected increases are too moderate. Germany cannot fund stimulus packages or infrastructure improvements as long as it remains committed to the zero-deficit policy that is so popular among its conservative voters. Especially in light of the Greek fiscal crisis, Germany, which has been urging EU member states to reduce their own spending, is unlikely to implement the kinds of Keynesian policies that could reduce its national savings.

Even with the introduction of a minimum wage in January, German salaries will not rise significantly. The wage restraint introduced more than a decade ago was largely a function of negotiations between employers and labor unions, and despite a slight rise in the number of strikes in recent months, in an economic environment characterized by minimal growth and low inflation, those agreements probably will not change.

These significant obstacles to policy reform aside, there is some doubt that raising wages would be effective in combating Germany's trade imbalance if implemented. Even with wage restraint, labor costs within Germany are already higher than those in much of the eurozone, and German industries owe their competitiveness more to the type and quality of the goods they manufacture than to low production costs.  (και σε ανώμαλους κανόνες και ιδεοληψίες που καλλιεργεί!) It would be difficult for other countries to take market share from Germany simply by lowering their labor costs.

There is also no guarantee more highly paid Germans would purchase more imported goods such as Portuguese cork. In fact, the country's shrinking and aging population is more likely to save than spend money in preparation for retirement, and if Germans do purchase more it is likely to be from main trade partners such as China, France, the Netherlands and the United States.

In recent months, the strengthening of the U.S. dollar and the European Central Bank's purchasing of sovereign debt from member states has resulted in the depreciation of the euro. While the German Bundesbank criticized the ECB's move, the weakness of the euro will only bolster German exports.

The Future of the Eurozone

The debate over Germany's trade surplus highlights the fundamental problem at the heart of the European Union: how free trade and a common currency have helped foster inequality across Europe.

The European Union was built on the promise that the free movement of goods, services and people would bring prosperity to all its member states. But it did not offer a solution to the fundamental inequality between the states it sought to unite. An expansion in Germany's domestic consumption would not necessarily yield a corresponding rise in exports from countries such as Greece or Portugal because those countries owe their weak manufacturing sectors to factors that existed long before the introduction of the euro, such as inflexible labor markets and under-developed infrastructure. Locking these countries into one currency along with industrial giants such as Germany has hampered their ability to fend off economic crisis with monetary policy.

The European economic crisis was partially the result of combining a diverse set of nations, each with different goals, challenges and resources, into one union governed by an incomplete institutional framework. As member states have begun re-evaluating their relationship with the European Union, that crisis has rapidly become a political one. Parties advocating separation from the union have sprung up across Europe, and anti-immigration parties are also gaining political sway.

Europe's political crisis does not spell the imminent dissolution of the European Union, nor has it reached the point where individual states demand tariffs or quotas to protect their most vulnerable industries. However, the next step in the debates over Europe's future will involve the questioning of free trade. At its formation the European Union promised greater prosperity for the entire Continent; to continue in its current form, Brussels will have to demonstrate that it can give its member states equal access to the benefits of economic growth.