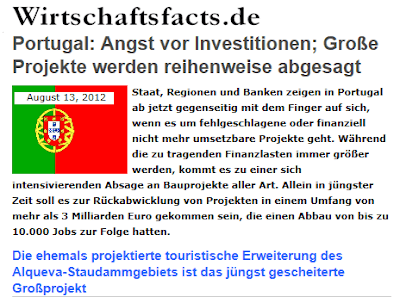 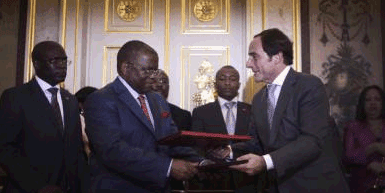 Foreign companies are increasing their presence in financially struggling Portugal. Companies from Angola, Brazil and China are buying stakes in private and state-owned Portuguese companies due to the appealing prices and the extensive market access that Portuguese companies have to some Latin American and African countries.

The financial crisis has severely hurt Portugal. The country's economy contracted by 1.5 percent in 2011 and is expected to continue shrinking in 2012 and 2013. Lisbon received a 78 billion-euro (roughly $96.5 billion) bailout from the European Union and the International Monetary Fund but is struggling to get its budget deficit under 3 percent from 9.8 percent in 2010 and 4.2 percent in 2011. In July, Portugal's unemployment rate exceeded 15 percent -- a record since Portugal joined the European Economic Community in 1986.

One significant effect of the crisis is the growing foreign investment in Portugal. As part of its bailout program, Portugal agreed to sell state enterprises to reduce spending. Lisbon's need to sell public companies created an opportunity for foreign investors to take over banks, energy companies and airlines. As its financial situation worsens, emigration rates of Portuguese citizens to former Portuguese colonies in Africa and Latin America are growing. Now Lisbon is turning to Brazil and Angola as sources of investment capital for troubled Portuguese companies. Chinese companies are also taking advantage of the Portuguese crisis.

Angola's economy has grown dramatically in recent years, and its oil industry has expanded significantly. According to the International Monetary Fund, Angola's economy could grow as much as 11 percent in 2012. This means two things. First, Angola has more resources to invest abroad. Second, its domestic market will be increasingly attractive to local and foreign companies. Angola is currently Portugal's main trade partner outside the European Union, and Angolan companies are increasing their presence in the Portuguese economy.

Sonangol is the Angolan government's main actor in the energy sector and is a crucial part of Angola's foreign investments. Since the beginning of the crisis in 2007, Sonangol has doubled its share in Portugal's largest bank, Millennium bcp, and controls the single biggest share in the bank.
Sonangol also controls Amorim Energia, which manages Portugal's only oil and natural gas operator, Galp Energia. This company is engaged in activities such as natural gas supply, regasification, transport, storage and distribution as well as petroleum products' exploration, production, refining and trading. In early 2011, Sonangol also bought a part of ESCOM, the African mining and property arm of Portugal's Grupo Espirito Santo.

Dos Santos recently increased her holding in ZON Multimedia, a company whose main assets include a satellite and cable operator, internet service provider, a movie distributor and a mobile phone services carrier. On July 31, the company announced plans to continue expanding its operations in Africa.

According to the Central Bank of Brazil, foreign direct investment by Brazilian companies in Portugal surged 600 percent in the first five months of 2012 and reached 48.5 million euros between January and May, compared to just 7.5 million euros in the same period in 2011. However, Portuguese investment in Brazil is still stronger -- it reached 203.7 million euros in the first five months of 2012 compared to 137.7 million in the same period in 2011.

Brazilian companies such as aircraft manufacturer Embraer and cement company Camargo Correa currently operate in Portugal. In June, Camargo Correa took control of the Portugal-based cement group Cimpor-Cimentos de Portugal in a 2.5 billion-euro operation -- the largest operation in Europe by a Brazilian company. In September, Embraer will open a new factory in Evora, a town in southern Portugal. The factory represents an investment of 177 million euros and highlights the interest of foreign companies -- especially in the manufacturing sector -- in the European common market.
Brazilian businessmen are closely following the sale of state assets in Portugal. They are interested in the TAP Portugal airline, the Estaleiros Navais de Viana do Castelo shipyard, the insurance arm of financial group Caixa Geral de Depositos and the Portuguese postal service.

China has taken advantage of privatizations in Portugal, in line with Beijing's tactic of obtaining strategic assets in struggling European countries. In December 2011, state-owned China Three Gorges Corp. invested in the Portuguese state-owned power company Energias de Portugal. The Chinese company offered 2.69 billion euros for the company. Because Energias de Portugal is also a strong power producer in Brazil, China Three Gorges Corp. gained access to the Portuguese and Brazilian markets through this acquisition. China Three Gorges is also looking to expand its expertise in hydroelectric power, with the Latin American and European markets in mind
.
In January 2012, the State Grid Corporation of China acquired one-fourth of the power grid company Redes Energeticas Nacionais, which is engaged in the transmission of high-voltage electricity and natural gas transportation and storage. This acquisition will open the door for a deepening of the already strong Chinese investment in Africa. In July, Redes Energeticas Nacionais announced negotiations for a partnership with Mozambican power company Electricidade de Mocambique for energy projects worth around $1.7 billion. Mozambique is another former Portuguese colony.

The agreement that Portugal signed with the European Union and the International Monetary Fund in May 2011 identified the specific state-owned companies that Lisbon had to sell. The Portuguese state has already reduced its presence in some of them (Energias de Portugal, Galp Energia and Redes Energeticas Nacionais), and a few additional companies will be sold by the end of 2012. These include TAP Portugal airline and the state airport manager, Aeroportos de Portugal. Lisbon is also seeking to sell the national postal service and insurance company Caixa Seguros. Brazilian, Angolan and European investors have already expressed their interest in these companies. Portugal also agreed to sell smaller state-owned companies, which were not specified in the agreement with the International Monetary Fund and the European Union.

Private companies are also likely to seek foreign investment to strengthen their financial position. As a result, competition between foreign investors over private and state-owned companies will increase in the coming months.

On May 10, the Angolan Minister of State and Economic Coordination (and possible successor to President dos Santos), Manuel Vicente, said direct investment in Portugal is no longer Angola's priority, and the country will focus more on domestic investments. Vicente also said the Angolan government would seek to diversify its foreign presence. On July 12, the chairman of Espirito Santo Bank Angola, Alvaro Sobrinho, said that investment returns were very unsatisfactory in Portugal and therefore Angolan businesses should invest elsewhere.

Angolan and Brazilian businesses will still see Portugal as a relatively safe place that is politically and culturally familiar, but they may be willing to diversify their investment destinations if the economic situation in Portugal continues to deteriorate. Economic and strategic opportunity will continue to dictate China's investment, as China's interests lie in strategic assets, such as energy infrastructure and ports or in financial sectors.

Finally, privatizations will enable Lisbon to receive fresh funds and reduce costs. The Portuguese government expects to make some 5.5 billion euros from its privatization programs. This will allow Lisbon to mitigate the spending cuts that are being carried out as part of its bailout. However, these are one-off measures whose benefits will end once the companies are sold. 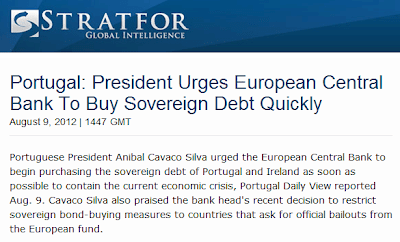 Denmark's economy is expected turnaround from a far. In particular, the labor markets and consumer spending consumers prepare the country sustained serious problems. Though the national economic output in the first quarter grew by 0.3%, but experts agree it is no ray of hope, but only a small outlier of the continuing recession. Danish companies are responding to a worsening outsourcing of jobs to Eastern Europe.