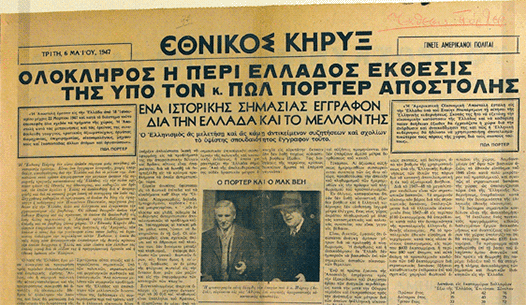 We are facing a situation unprecedented in our history," and we will simply have to develop a new and American means of coping with it. The British formula in such cases was always collaboration with the native ruling classes —buying their support by confirming them in their power to exploit the masses, and relying upon them to hold the people down with gendarmery and whips.

This formula is not only repugnant to American traditions. It is also impractical. No system would deliver the Greek people more speedily into the arms of the Russians. We must work out a formula for starting from the bottom and working up—not starting from the top and working down. Russia is standing patiently by, hoping to get into Greece by a base on balls. It is confident that Greek incompetence and Greek reaction, combined with American inexperience and American gullibility, will doom the efforts of the American mission. We will soon be so frustrated by inefficiency, vacillation and simple knavery, Russia hopes, that we will grow disgusted and indifferent and finally walk out. Then guess who will walk in!

I think Americans have enough resourcefulness and perseverance to lick the problem. If we are defeated in Greece, it will be a crushing moral and strategic blow to our new international role solar plexus. But, if we can leave Greece in a state of economic and political health, we will have brought new hope and new faith to freedom-loving people everywhere in the world.