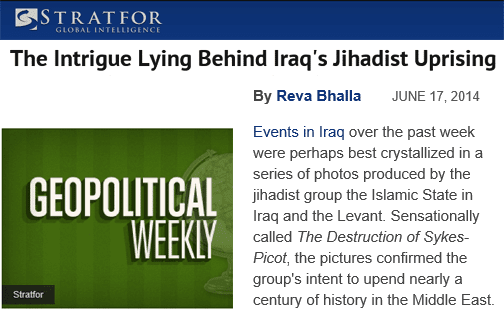 "...From the point of view of Iraq's jihadist celebrities, the 1916 borders drawn in secret by British and French imperialists represented by Sir Mark Sykes and Francois Georges-Picot to divide up Mesopotamia are not only irrelevant, they are destructible... the most ardent defenders of those colonial borders sit in Baghdad, Damascus, Ankara, Tehran and Riyadh while the Europeans and Americans, already fatigued by a decade of war in this part of the world, are desperately trying to sit this crisis out... Turkey has forged an alliance with the Iraqi Kurdish leadership in a direct challenge to Baghdad's authority.... Turkish Energy Minister Taner Yildiz announced June 16 that a third tanker would be loaded within the week...  But Turkey's support for Iraqi Kurds also has limits... Turkey never intended to underwrite Kurdish independence. And with Kirkuk now in Kurdish hands as a result of the jihadist surge, the largest oil field in northern Iraq stands ready to fuel Kurdish secessionist tendencies. Much to Turkey's dismay, Kurdish militants from the Kurdistan Workers' Party and the People's Protection Units are already reinforcing peshmerga positions in northern Iraq. At the same time, the Islamic State in Iraq and the Levant and its jihadist affiliates are holding 80 Turkish citizens hostage....  Turkey will thus enlarge its footprint in Mesopotamia, but not necessarily on its own terms...  Iraq's Kurdish leadership will be reminded of their deep distrust for Turkey but will also be overwhelmed by its own challenges, not least of which is Turkey's main regional competitor, Iran...

Iran on the Defensive...

...As a bonus for Saudi Arabia, even as the Sunni uprising is largely confined to Iraq's Sunni belt and thus unlikely to seriously upset Iraq's production and exports from the Shiite south, the price of Brent crude has climbed to $113 a barrel for the first time this year. Saudi Arabia is not the only one that welcomes this bump in the price of oil; Russia is quite pleased with the outcome in Iraq as well....

Just days before the Islamic State in Iraq and the Levant-led offensive in Iraq, a quiet meeting took place at Russian President Vladimir Putin's vacation spot in Sochi on June 3. Putin invited Saudi Foreign Minister Saud al-Faisal to see him and Russian Foreign Minister Sergei Lavrov, who cut short an engagement in Moscow to get there on time. Details on the meeting are scarce...

Both Saudi Arabia and Russia share two key interests: undermining the U.S.-Iranian negotiating track and ensuring oil prices remain at a comfortable level, i.e., above $100 a barrel. There is little either can do to keep Iran and the United States from negotiating a settlement. In fact, the jihadist threat in Iraq creates another layer of cooperation between Iran and the United States. That said, Washington is now facing another major Middle Eastern maelstrom at the same time it has been anxiously trying to prove to itself and everyone else that the United States has bigger issues to deal with in other parts of the world, namely, in Russia's backyard. Moreover, the United States and Turkey are not of one mind on how to manage Iraq at a time when Washington needs Ankara's cooperation against Russia. If an Iraq-sized distraction buys Moscow time to manage its own periphery with limited U.S. interference, all the better for Putin. Meanwhile, if Saudi Arabia can weaken Iran and test U.S.-Iranian cooperation, it might well be worth the risk for Riyadh to try -- at least for the time being.

A Lesson from History

Whether by mere coincidence, strategic design or a blend of the two, there are as many winners as there are losers in the Iraq game. Russia knows this game well. The United States, the heir to the Sykes-Picot map, will be forced to learn it fast.

When the French and British were colluding over the post-Ottoman map in 1916, czarist Russia quietly acquiesced as Paris and London divided up the territories. Just a year later, in 1917, the Soviets threw a strategic spanner into the Western agenda by publishing the Sykes-Picot agreement, planting the seeds for Arab insurrection and thus ensuring that Europe's imperialist rule over the Middle East would be anything but easy. The U.S. administration recognizes the trap that has been laid. But more mindful of the region's history this time around, Washington will likely leave it to the regional players to absorb most of the risk".