because of the geopolitical importance of the region, Cyprus will have little control over factors that influence the development of its energy sector 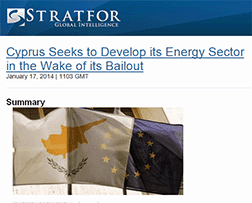 Nearly a year has passed since Cyprus was confronted with the terms it had to meet to receive a 10 billion euro ($13.6 billion) bailout from the European Union and the International Monetary Fund. With the bailout, Cyprus avoided a sovereign default, but it has still fallen into a deep economic crisis that could last for years. Nicosia can profit from the attention of larger powers that want influence in the Eastern Mediterranean, but . Overhauling the energy sector will remain a long-term goal for Nicosia even though such reform will not improve the country's economic situation in the short term.

...Despite the restructuring of Cypriot banks and a weak current state, the financial sector is likely to remain an important part of Cyprus' economy...

...Ankara has not taken significant action to block exploration and has focused on domestic and regional instability rather than escalating a conflict with Cyprus. Nonetheless, some kind of accommodation with Turkey would be necessary for commercial natural gas operations. The European Union supports Cyprus but has little capacity to focus on the Eastern Mediterranean in light of Europe's structural crisis. Beyond joint plans with Israel, further U.S. or Russian involvement will be required to either facilitate an agreement with Turkey or to give companies the security that, despite Turkish threats, their developments will not be blocked...

...Closer ties with Russia in the form of a more permanent military base could come at a big cost for Cyprus. European and U.S. partners play an important role in its energy sector plans...

...However, a withdrawal of Western interests as a result of stronger Cypriot ties to Russia would make Nicosia dependent on aid from Russia. It could also undermine Cyprus' plans to develop its natural gas sector, since Moscow would have little interest in providing Europe with alternative natural gas sources.
Posted by archaeopteryx at 4:30 μ.μ.
Αποστολή με μήνυμα ηλεκτρονικού ταχυδρομείου BlogThis!Μοιραστείτε το στο TwitterΜοιραστείτε το στο FacebookΚοινοποίηση στο Pinterest