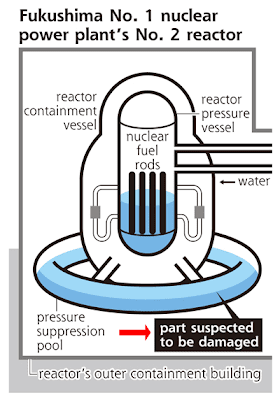 TOKYO (Kyodo)--A nuclear crisis at the quake-hit Fukushima No. 1 nuclear plant deepened Tuesday as fresh explosions occurred at the site and its operator said water in a pool storing spent nuclear fuel rods may be boiling, an ominous sign for the release of high-level radioactive materials from the fuel.

The government ordered the plant's operator, Tokyo Electric Power Co., on Tuesday night to inject water into the pool at the No. 4 reactor to cool it down "as soon as possible to avert a major nuclear disaster."

The firm said it has not yet confirmed the current water level or water temperature in the pool and will try to pour water into the facility from Wednesday through holes that were created following an explosion earlier Tuesday in the walls of the building that houses the reactor.

Due to high radiation levels at the No. 4 reactor, workers on Tuesday were unable to prepare for the pouring of water into the troubled pool. Difficult conditions have led the utility to evacuate around 730 of the 800 workers from the site, according to TEPCO. Και όσοι μένουν πίσω... Θα είναι οι μεθαυριανοί ήρωες...
15 March 2011 Last updated at 18:18 GMT
http://www.bbc.co.uk/news/world-asia-pacific-12749444
Radiation falls at Japanese plant

Radiation levels have fallen at Japan's earthquake-stricken Fukushima Daiichi nuclear plant, the government says.
The levels had spiked to harmful levels after a fire and a third explosion at the site

Crude Oil Prices Falling On Japanese Economic Worries
http://e.nikkei.com/e/fr/tnks/Nni20110315D15JFA07.htm
TOKYO (Nikkei)--International crude oil prices are inching lower on concern that economic conditions in Japan may deteriorate following last Friday's earthquake and tsunami.
Prices briefly soared to a two-and-a-half year high when political unrest escalated in the Middle East and North Africa. But since the massive temblor, they have faced downward pressure on speculation about a worsening economic outlook for Japan.


http://au.news.yahoo.com/thewest/a/-/full-coverage/9017940/japan-races-to-contain-nuclear-disaster/ 5:06 am Japanese crews are battling to avert a nuclear disaster and say they may pour water from helicopters to stop fuel rods from being exposed to the air and releasing even more radioactivity

TOKYO — http://www.nytimes.com/2011/03/16/world/asia/16nuclear.html?ref=asia Workers Strain to Retake Control After Blast and Fire at Japan PlantA small crew of technicians braved radiation and fire through the day on Tuesday as they fought to prevent three nuclear reactors in northeastern Japan from melting down and to stop storage pools loaded with spent uranium fuel pods from bursting into flames

The plant is reeling from Friday's massive earthquake and tsunami. Radiation levels reached 400 millisieverts per hour within the plant grounds at one point in the morning. Tepco said this was largely due to fragments from an explosion at the No. 4 reactor building

Around 5:45 a.m., a worker at the plant saw flames on the fourth floor of the reactor's building, believed to be the same spot where an apparent hydrogen explosion caused a fire Tuesday morning

Wednesday, March 16, 2011
http://e.nikkei.com/e/fr/tnks/Nni20110316D16JF002.htm
Fukushima No.3 Reactor's Container Feared Damaged: EdanoTOKYO (Kyodo)--The container of the No.3 reactor of the quake-hit Fukushima No.1 nuclear power plant is feared to have been damaged and may have leaked radioactive steam Wednesday, emitting high-level radiation, Chief Cabinet Secretary Yukio Edano said.

The explanations were given after smoke was seen rising from the No.3 reactor since around 8:30 a.m., according to Edano.

http://au.news.yahoo.com/thewest/a/-/newshome/9017940/japan-races-to-contain-nuclear-disaster/
UPDATE, 12.50pm: Japan has suspended operations to keep its stricken nuclear plant from melting down after surging radiation made it too dangerous for workers to stay.
Chief Cabinet Secretary Yukio Edano said the workers dousing the reactors in a frantic effort to cool them needed to withdraw.“The workers cannot carry out even minimal work at the plant now,” Mr Edano said. “Because of the radiation risk we are on standby,” he said.
As Japan struggles to avert a meltdown another earthquake has struck in the Pacific just off Japan’s Chiba prefecture. The Japan Meteorological Agency said the strong 6.0 magnitude quake was strong enough to sway buildings in Tokyo

http://www.nytimes.com/2011/03/16/world/asia/16nuclear.html?ref=asia
TOKYO — A small crew of technicians, braving radiation and fire, became the only people remaining at the Fukushima Daiichi Nuclear Power Station on Tuesday — and perhaps Japan’s last chance of preventing a broader nuclear catastrophe

Japan’s nuclear crisis intensified again Wednesday, with Japanese authorities announcing that a containment vessel in a second reactor unit at the stricken Fukushima Daiichi plant in northeastern Japan may have ruptured and appeared to be releasing radioactive steam. That would be the second vessel to be compromised in two days

The vessel had appeared to be the last fully intact line of defense against large-scale releases of radioactive materials, but it was not clear how serious the possible breach might be.

... unclear if the fire, at the Reactor No. 4 building, had died out. He also was not clear if it was a new fire or if the fire Tuesday had never gone out.

http://live.reuters.com/Event/Japan_earthquake2 11:15 am
Kyodo is reporting that the defence minister says it has not been possible to drop water from helicopter onto the reactor. It says this appears to be due to high radiation levels

http://live.reuters.com/Event/Japan_earthquake2 11:31
TEPCO says it is pouring water into reactors 5 and 6 at Daiichi

Wednesday, March 16, 2011http://e.nikkei.com/e/fr/tnks/Nni20110316D16JF060.htm
SDF Choppers Unable To Drop Water On Nuke Reactor Due To RadiationTOKYO (Kyodo)--The Self-Defense Forces will not conduct a planned operation Wednesday to drop water from helicopters on the troubled No. 3 reactor of the Fukushima nuclear power plant because of the high radiation level around the plant, Defense Ministry officials said.

The Ground Self-Defense Force helicopters were on standby to drop water on the reactor as it is feared the reactor may have released radioactive steam due to damage to its containment vessel
TOKYO (Dow Jones)--Preparations are underway for a new attempt to cool reactors at a stricken nuclear power station, Japan's top government spokesman said Wednesday, as media reports indicated a plan to drop water on the plant from helicopters had been abandoned for the day.

Chief Cabinet Secretary Yukio Edano said the new cooling operations at the Fukushima Daiichi Nuclear Plant would begin in the evening, although he didn't specify what the operations would involve.

Local media reported that an earlier plan to drop water on reactor at the site No. 3 using Self Defense Force helicopters had been abandoned due to excessive radiation levels at the site.

Edano said radiation at the plant was about 1,500 microsieverts as of 0700 GMT. He said that the latest readings posed no immediate danger to the health of people remaining in the evacuation area around the plant.

Earlier in the day Japan's Nuclear & Industrial Safety Agency said the radiation level around the plant peaked at 6,400 microsieverts at 0145 GMT after smoke was seen coming from one of the reactors. Edano said at an earlier briefing that the most likely explanation for the sudden rise in radiation levels was an emission of radioactive steam from the containment vessel.

A chest x-ray typically exposes the patient to a radiation dose of around 100 microseverts, according to the Radiological Society of North America. The U.S. Nuclear Regulatory Commission has a dose limits of 10,000 microsieverts per nuclear event and an annual occupational limit for workers who deal with radiation on the job of 50,000 microsieverts. The U.S. Environmental Protection Agency advises that a dose of 500,000 microseiverts can cause nausea, while 4 million microseiverts can be fatal if not treated.

http://www.iaea.org/newscenter/news/tsunamiupdate01.html
16 March 2011, 03:55 UTC
Japanese authorities have also informed the IAEA that at 12:00 UTC of 15 March the water level in Unit 5 had decreased to 201 cm above the top of the fuel. This was a 40 cm decrease since 07:00 UTC of 15 March. Officials at the plant were planning to use an operational diesel generator in Unit 6 to supply water to Unit 5

http://live.reuters.com/Event/Japan_earthquake2 Japan's nuclear safety agency says radiation levels outside the Daiichi plant spiked at about noon, but then fell back. 2:53 p.m.

http://www.bbc.co.uk/news/science-environment-12745186
(χθεσινό συμβάν) It appears that for the first time, the containment system around one of the Fukushima Daiichi reactors has been breached.

Officials have referred to a possible crack in the suppression chamber of reactor 2 - a large doughnut-shaped structure, also known as the torus, below the reactor housing.

That would allow steam, containing radioactive substances, to escape continuously.

TOKYO (Kyodo)--Japan's nuclear crisis at the Fukushima No. 1 power station showed no signs of abating Wednesday, five days after a mega earthquake crippled it, with the focus shifting to how to address the possible overheating of pools that store spent fuel rods at the already troubled No. 3 and No. 4 reactors.
What appeared to be smoke coming from the No. 3 reactor in the morning led the top government spokesman to point to the possibility of damage to the reactor's steel containment vessel, but it became more likely later in the day that the smoke was radioactive steam coming from the No. 3 reactor's spent fuel pool. Και άντε να ξέρουμε τι προτιμάμε... 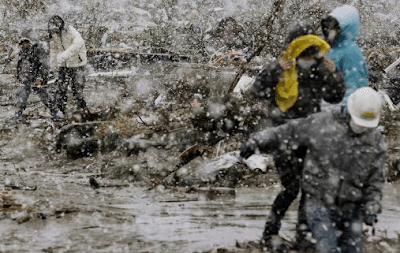 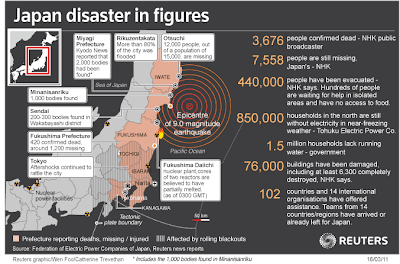