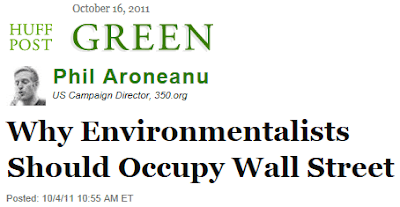 We have set forth in this blog, as well as here, what appears as evidence that the current "Green" movement -- the Antropogenic Global Warming and the ensuing Renewable Energy craze -- may have German origins. Of course, there are non-German entities that have been promoting either AGW, or Renewables, as well as Germans that are objecting to both.

Coincidentally, the rhetoric in Europe against "the excesses (or weaknesses) of the markets" or the "unreasonable power of the rating agencies" also appears to have the same geographic epicenter.

It is interesting that neo-socialists and Greens now seem to relish joining the Occupy Wall Street movement. Wall Street may have been guilty of excesses, cronyism,  inadequate self-regulation in the post Glass-Steagall abolition era and the loss of conservatism in accounting rules, and a myriad other evils.   Wall Street may also be a convenient scapegoat. Regardless of Wall Street's guilt or lack therof, the Green-Socialist connection makes yet another appearance and the source of the rhetoric may not be the ...U.S.S.R.