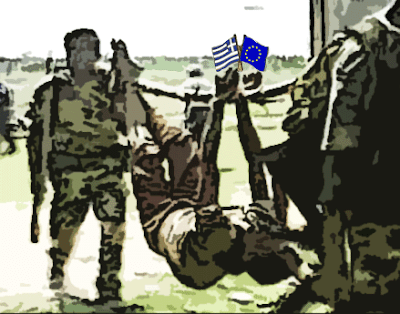 4. 14. Governing Law and Submission to jurisdiction ( ΣΧΕΔΟΝ ΣΕ ΟΛΑ ΟΣΑ ΕΧΩ ΔΙΑΒΑΣΕΙ )
α. The Agency Agreement, the Notes and the Coupons are governed by, and shall be construed in accordance with, English law.

β. The Republic hereby irrevocably agrees, for the exclusive benefit of the Paying Agents, the Noteholders and the Couponholders, that the courts of England are to have jurisdiction to settle any disputes which may arise out of or in connection with the Agency Agreement, the Notes and/or the Coupons and that accordingly any suit, action or proceedings arising out of or in connection with the Agency Agreement, the Notes and the Coupons (together referred to as Proceedings) may be brought in such courts. The Republic hereby irrevocably waives any objection which it may have now or hereafter to the
laying of the venue of any such Proceedings in any such court and any claim that any such Proceedings have been brought in an inconvenient forum and hereby further irrevocably agrees that a judgment in any such Proceedings brought in the English courts shall be conclusive and binding upon it and may be enforced in the courts of any other jurisdiction. Nothing contained in this Condition shall limit any right to take Proceedings against the Republic in any other court of competent jurisdiction, and the taking of Proceedings in one or more jurisdictions shall not preclude the taking of Proceedings in any other jurisdiction, whether concurrently or not. The Republic appoints the Economic and Commercial Counsellor for the time being of the Greek Embassy, la Holland Park, London Wll 3TP, Fax 00 44 207 72 79 934 as its agent for service of process in England, and undertakes that, in the event of such agent ceasing so to act or no longer having an address in England, it will appoint another person as its agent for service of process in England in respect of any Proceedings. Nothing herein shall affect the right to serve Proceedings in any other manner permitted by law. The Republic hereby irrevocably and unconditionally waives with respect to the Agency Agreement, the Notes and/or the Coupons any right to claim immunity from jurisdiction or execution and any similar defence and irrevocably and unconditionally consents to the giving of any relief or the issue of any process, including, without limitation, the making, enforcement or execution against any property whatsoever (irrespective of its use or intended use) of any order or judgment validly made or given in connection with any Proceedings. Notwithstanding the foregoing, under the laws of the Republic, the funds, assets, rights and general property of the Republic located in the Republic are immune from execution and

5. STATUS OF THE NOTES AND NEGATIVE PLEDGE

ΑΥΤΟ???
"including, without limitation, the making, enforcement or execution against any property whatsoever (irrespective of its use or intended use)"