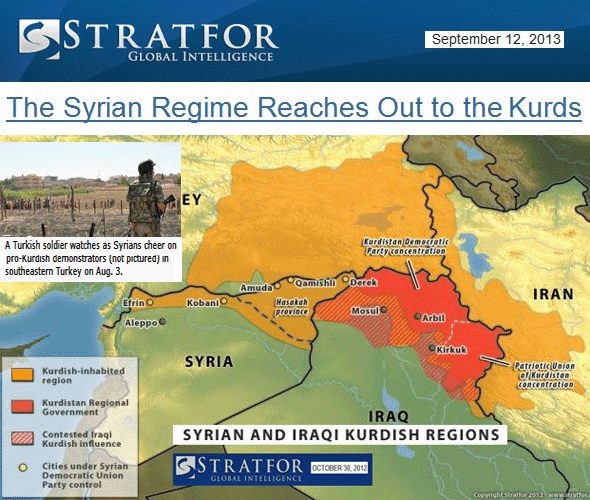 The U.S.-led military strike in Syria has been delayed by Russia's diplomatic proposal, but Syria knows the danger is not over. With the threat still looming, Syria is trying to limit the scope of a potential strike by ensuring that its northern neighbor, Turkey, is sufficiently intimidated so it remains on the sidelines of the operation. The most effective way for Syria to accomplish this is through the Kurds.

To that end, Syrian President Bashar al Assad has already launched a diplomatic effort to make peace with the Kurdish leadership in both Syria and northern Iraq in order to drive a wedge between Ankara's relations with the Kurds. At the same time, he is trying to forge an alliance with Kurdish fighters in northeast Syria against Sunni rebels. There are limits to al Assad's strategy, but the move comes at an opportune time since Ankara is seeing its own peace negotiations with the Kurdistan Workers' Party in Turkey derail.

Omer Ose, a Kurdish member of the Syrian Parliament, traveled this week to northern Iraq with an important message for the Kurdistan Regional Government leadership from al Assad. Ose told Kurdish media outlet Rudaw on Sept. 10 that al Assad had instructed him to communicate to the Iraqi Kurdish leaders that the Syrian government is not against them and that he would like to invite Kurdistan Regional Government President Massoud Barzani to Damascus for an official state visit. Ose said that al Assad is also aware of Barzani's pledge on Aug. 10 to use all capabilities to defend Syrian Kurdish civilians against jihadist attacks in Syria and that he would allow the Kurdistan Regional Government to send its peshmerga fighters to Syria to fulfill that pledge. Ose appears to be an ideal emissary for al Assad to reach out to the Kurds. Based out of Damascus for the past three decades, Ose has maintained close relations with the al Assad clan even through the civil war. At the same time, Ose has a strong relationship with the region's main Kurdish groups, including the Kurdistan Regional Government in Iraq, the Kurdistan Workers' Party in Turkey (Ose's brother was a member of the group before he was killed in action) and the Democratic Union Party, Syria's largest and best-organized Kurdish organization. Ose has been on a mission to convince the region's main Kurdish organizations to reach a peace settlement with the al Assad government. Quiet security cooperation has already taken place between government forces and Syrian Kurds, and Democratic Union Party members are able to come and go through government checkpoints. Stratfor has received indications that most of the Kurdish parties are seriously considering the government's proposal for further cooperation, though the Democratic Union Party has so far rejected the idea of holding a news conference with Ose to publicly unveil a peace settlement with the Syrian regime.

Al Assad's strategy behind this outreach to the Kurds is based on three critical goals: deterring Turkey from military action in Syria, counterbalancing Turkey's attempts to expand influence in Syria and recruiting allies in the regime's battle against Sunni rebels.

Turkey is already facing growing complications on the Kurdish front. The Turkish government prided itself on pursuing a grand strategy to resolve its Kurdish separatist problem by pursuing an ambitious peace deal with the Kurdistan Workers' Party, known by its Kurdish acronym, PKK, while simultaneously strengthening economic linkages with energy-rich northern Iraq, a refuge for Kurdish fighters. This strategy was already facing a number of hurdles, but the power vacuum that developed in Syria's heavily Kurdish-populated northeast only compounded the problem for Ankara.

Under the leadership of the Democratic Union Party and in the footsteps of the Kurdistan Regional Government in Iraq, Syria's Kurdish leadership is now trying to carve out its own autonomous zone while battling jihadists for territory in the northeast. Already dealing with an active battle zone next door -- fighting that will serve as prime recruiting ground for both Kurdish militants and jihadists with potential interest in attacking Turkey -- Ankara now must also worry about Syrian Kurdish autonomy derailing its integration efforts with Kurds in Turkey.

Turkey has tried forging a relationship with Syria's Democratic Union Party with little success, as rumors abound of Turkey backing local Sunni fighters at the same time to keep Syrian Kurdish fighters occupied. Meanwhile, as Stratfor predicted, Turkey's peace track with the PKK is derailing. Alleging that the Turkish government has stalled in fulfilling its end of the first phase of the peace process (the passing of judicial reforms to free Kurdish prisoners and grant Kurdish cultural rights), the PKK has announced that it is halting the withdrawal of its fighters from Turkey. Internal Kurdish communiques are calling for popular demonstrations against the Turkish government to pressure Ankara to fulfill its pledges. Notably, the group is not calling for a resumption of attacks, which would erase the progress made thus far on the peace track, but is instead taking advantage of the protest culture that formed this summer with the Gezi park demonstrations to apply a different kind of pressure on the Turkish government.

Syria can try to take advantage of Turkey's multifaceted Kurdish problem by splitting Turkey and the region's main Kurdish groups through its own diplomatic outreach. Turkey is already wary of Syrian and Iranian efforts to strengthen covert ties with Kurdish militant factions using Syria as a staging ground for attacks in Turkey.

Syria's Kurdish leadership will be especially wary of publicly aligning itself with the pariah of the region, but there is a precedent for a working relationship between Damascus and Syrian Kurds. Ose, the Syrian Kurdish emissary, illustrates the patronage networks the Syrian regime relied on for decades to contain Kurdish separatism. The current, polarizing civil war conditions obviously complicate those arrangements, but the Kurds and the regime are, for now, facing a common threat from Sunni rebel fighters, including a growing number of jihadists who have made their way to Syria and are unwilling to cede control over a sizable share of Syria's energy resources to the Kurds.

At the same time, the Kurds are well aware that a strong Alawite regime in Damascus with consolidated control over the country would find common cause with Sunni Arabs to contain Kurdish separatism, as it did before the civil war. Surrounded, the Kurds often have to make deals with their adversary to make the most of their current condition. For now, the Kurdish imperative is to advance Syrian Kurdish autonomy and insulate Kurdish territory in both Syria and Iraq from a growing jihadist threat. With the country already deeply fragmented, al Assad will be willing to pay the price of recognizing Kurdish autonomy and empowering the regional Kurdish leadership in exchange for allies on the battlefield.

The region's Kurdish groups -- from Iraq's Kurdistan Regional Government to the PKK in Turkey to the Democratic Union Party in Syria -- will all try to use this offer from al Assad as leverage in their own negotiations with Turkey while keeping public distance from al Assad. Turkey will not be able to prevent quieter cooperation between the Syrian regime and the Kurds, however, and that will add yet another significant complication to a Kurdish containment strategy already fraught with problems.
Posted by archaeopteryx at 7:40 μ.μ.
Αποστολή με μήνυμα ηλεκτρονικού ταχυδρομείου BlogThis!Μοιραστείτε το στο TwitterΜοιραστείτε το στο FacebookΚοινοποίηση στο Pinterest