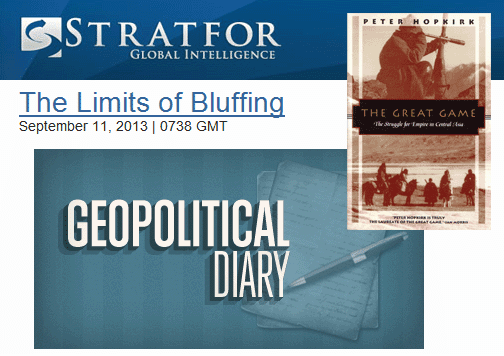 "The United States will carry out military strikes against Syria if its regime fails to neutralize its chemical weapons in accordance with a Russian initiative, Israeli President Shimon Peres said, AFP reported Sept. 11. Russia's proposal has seemed to extinguish the military threat to Syria but in reality it is a non-starter".

The Limits of Bluffing

The president tried to articulate how an unanswered chemical weapons attack would impact U.S. national security, and he shed a bit more light on the intelligence that the United States has collected to link the regime to the attack. He also tried to define a limited U.S. strike as strong enough to hurt the regime, but not so damaging that the United States would be left to clean up the aftermath. To tie it off, the president made a moral argument rooted in American exceptionalism to rally a skeptical Congress. In spite of these efforts, the U.S. administration remains trapped in the same growing web of bluffs it was in before Obama delivered this message.

These bluffs have marked the turning points of the Syria crisis thus far. Bluffing is an age-old tactic in diplomacy. When faced with limited options, it can be a very powerful tool, if employed properly. As Machiavelli advised five centuries ago, "It is very wise to simulate madness at the right time." Indeed, a bluff timed with precision at a high pressure point that achieves the desired result without firing a single shot can transform a mediocre name in political history into a legacy overnight. That said, it would be difficult to impress Machiavelli with the bluffs used so far in the context of the Syria crisis.

Obama made the first bluff last August during the final campaign stretch for his re-election. Speculation had re-emerged over a strike on Iranian nuclear facilities, and Israel was trying to pressure Obama to draw a red line on Syria's alleged small-scale use of chemical weapons in July 2012 and Iran's continued pursuit of nuclear weapons. At the time, Obama could have reasonably concluded that there was a low probability of an embattled Syrian regime risking foreign intervention by carrying out a large-scale chemical weapons attack when it could still rely on its conventional forces to battle the rebels. But just one year later, the regime appears to have called Obama’s bluff and deployed chemical weapons in sizable amounts. [αν αληθεύει, που εγώ δεν το ξέρω]

With the credibility of U.S. ultimatums at stake, not just for Syria, but for any power willing to challenge Washington, Obama needed to cobble together a coalition in haste, but he found out that even his impassioned allies, in Europe as well as in Congress, were losing their enthusiasm for military intervention.

Then came Russia's grand bluff. Russian President Vladimir Putin saw an opportunity to assert Russia as a great power with the influence to make the United States bend and its allies quiver. Moscow's bluff came in the form of a well-timed proposal to secure, seize and destroy Syria’s chemical weapons stockpiles. To the relief of many, the move actually seemed to extinguish the military threat to Syria. In reality, Russia's proposal was a non-starter. Sending hundreds of U.N. inspectors and technicians to secure 1,000 metric tons of chemical weapons stockpiles spread across at least 50 sites in a country embroiled in a brutal civil war is a long, arduous and highly complicated process – a mission that would require ground troops at a time when no country, not even Russia, appears prepared to take that risk. Still, the proposal sounded good enough for the White House and its European allies to apply the brakes to the military option and shift to the diplomatic route.

Now it is time for the United States to call the Russian bluff on the proposal. When U.S. Secretary of State John Kerry goes to Geneva on Thursday to meet with Russian Foreign Minister Sergei Lavrov, he will press him on the details of the proposal in an attempt to poke holes in the plan with the world watching. Russia will try to show that an ambitious diplomatic endeavor of this nature cannot be rushed, and certainly cannot be sabotaged with American threats of military action or threats from France to send Bashar al Assad to the Hague. The United States can put off a U.N. Security Council meeting to avoid negotiating with Russia over a watered down resolution, but it cannot meet a Russian demand to take the military option off the table. If Obama wants to preserve any credibility in this crisis, he must maintain a credible military threat if and when the diplomatic proposal flops.

Russia can always distance itself from fault if U.N. members refuse to commit ground troops to the operation or if the United States tries to cast the Russian proposal as a delay tactic unworthy of further consideration. Obama, however, will be left with the inevitable choice of backing out of a military campaign or proceeding with a limited strike based on a stale premise and possibly without the full endorsement of Congress. At some point, the bluffing game will run its course. The final move in this game will go to Obama, and no matter what moves have been made in the meantime, he'll still probably be looking at a weak hand.